The brand new Parish Hall at Enstone was opened by the Prime Minister, and MP for Witney, the Right Honourable David Cameron in a short ceremony on Thursday 27 November 2014. The Prime Minister met Parish Councillors, adults and children from Enstone, and many others who had played a role in building and funding the new Hall.

On arrival for the opening the Prime Minister was greeted by the Chair of the Parish Council Mr David Parris and by Mr Rob McGrigor who had led the project to build the new hall. 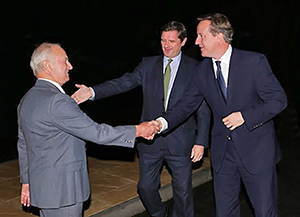 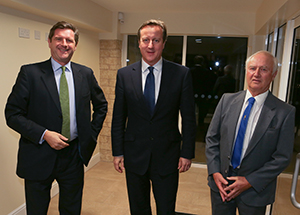 In his opening speech the Prime Minister emphasised the vital contribution of village halls to sustaining local communities, he admired the appearance and height of the Enstone Hall, congratulated the council on getting it built, and recognised the contributions made by organisations and individual members of the local community towards funding it.

A pupil from Enstone School, Arnold Blacker, brought forward to the Prime Minister for display in the Hall, a painting that had been made by the pupils at the school to commemorate the 100th anniversary of the start of World War I.

Finally the Prime Minister unveiled a slate plaque to commemorate the opening, commenting, “I get to open many buildings, but this is actually the first time I have opened a building that wasn’t already open”. 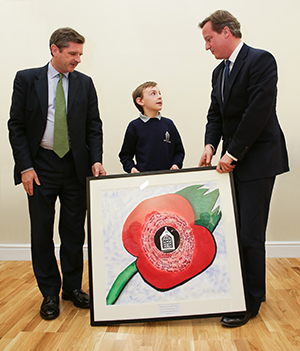 Enstone Parish Council has long been trying to replace the earlier Parish Hall, a corrugated iron building dating from 1922, and finally achieved it on a new site in Enstone as part of The Paddocks housing development by Persimmon Homes. The sale of the site of the old Parish hall and a major grant from West Oxfordshire District Council enabled the Council to fund the building. The superb new hall is now open for business, and despite a total cost of half a million pounds, the cost on the tax bill of local households will be only £1 a year. The entire building is heated by ground source heat pumps from boreholes and comprises a lofty main hall, a multi-purpose meeting room for up to 30, a professionally equipped kitchen and on site parking.

Rob McGrigor thanked those businesses and individuals who had contributed so generously towards the building, mentioning West Oxfordshire District Council, Oxfordshire County Council, the Trust for Oxfordshire’s Environment (TOE2) with funds from Grundon Waste Management Ltd through the Landfill Communities Fund, and the Co-op.