An event every week that begins at 9:30 am on Wednesday, repeating until 22 December, 2021 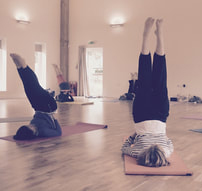 Nicole has been teaching yoga for more than 15 years and practicing for more than 20.  Originally from Australia but brought up in South East Asia, she has had a  life-long fascination with Eastern philosophy and spirituality. As well as two separate 200 hour Yoga teacher trainings, she has also done two diplomas in Buddhist Philosophy and Thought with the Jamyang Centre in London.

Originally a specialist in pregnancy and postnatal yoga, Nicole then expanded her remit to teach a wide variety of Hatha and Dynamic Flow yoga classes. Her most recent 200 hour teacher training was completed with the Life Centre in London, where she passed with a distinction.
​
Her yoga style is dynamic, playful and entirely unparsimonious. Each class is deliberately multi-layered and includes varied asana sequencing, attention to both alignment and breath, and is underpinned by yogic and Buddhist philosophy that has been interpreted for modern life.