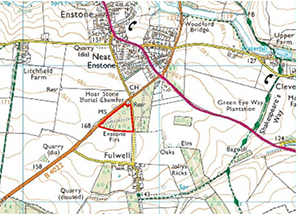 Following the felling of trees that was necessary due to Ash Dieback Disease, replanting is now being completed in a similar style to that last adopted on this site in the 1950’s, with a predominantly native broadleaved planting together with a coniferous nurse. A total of approximately 4600 trees are to be planted, comprising Beech, Lime, Wild Service Tree, Hazel, Thorn, Wild Privet and Wayfaring Tree.

Pedestrian access gates are being installed at either end of the permitted footpath route. However, after felling and mulching of stumps and debris, the site is understandably quite ‘raw’. The intention is that the gates are locked as an interim measure until the site has had time to mellow, and nature has had time to naturally colonise the areas between the young trees with vegetation. Once this has occurred, it will be possible for the gates to be unlocked and walkers then to access along the designated route, as had occurred prior to the onset of Ash Dieback Disease and the unfortunate need to fell and replant.

If you have any questions please do not hesitate to contact:

Forestry Consultant to the Ditchley Estate