Last month we held a Zoom meeting. Liz Woolley spoke about Child labour in nineteenth-century Oxfordshire. She told us about children as young as six working in agriculture, domestic service, lace making and many other small scale occupations. Our October meeting is usually our Harvest celebration but this has been cancelled and we look forward to getting together via Zoom in November.

Held in The Parish Hall, The Paddocks, Coxs Lane, Enstone, OX7 4AZ on the second Thursday of the month 7.30pm till 9.45pm 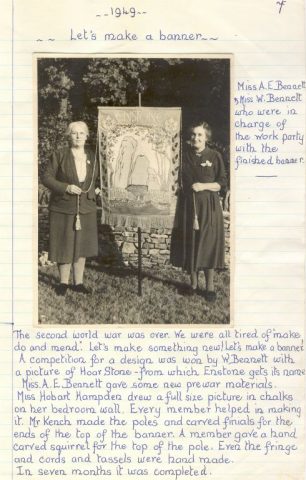 Enstone W.I. was formed in 1921 with the aim of improving the lives of village women. Between the wars, much was done to achieve these aims.

One of our most successful campaigns led to the introduction of a 30 mile speed limit, through the village.

Now in the 21st century, we work towards enhancing the lives of women. But at the same time, our aim is to find friendship, and have fun.

Come to one of our meetings, on the second Thursday of each month, listen to interesting speakers, and learn a new craft or skill. Throughout the year, we have outings, walks, meals, and barbecues. There is also the chance of joining the County Federation on their activities. Or choosing one of the many enriching courses on offer at Denman the WIs own college.

We celebrated our 94th year with a party in the Litchfield room in the New Parish Hall in March.

April is our Annual General Meeting and with a new home we also have a new President who will promote the younger image of the WI.

We followed our AGM with a talk on The History of Masks, with a wonderful display of Masks and their interesting history.

A centenary baton travelled around England, Wales and the Isles. It arrived in Shipton under Wychwood on Friday 17th April, 2015 for the evening and travelled to Spelsbury Village Hall for breakfast, to Broughton Castle for a picnic, Bloxam School for tea and then to Greys Court for the hand over to the Buckinghamshire Federation. It was conveyed by a number of interesting forms of transport including a fire engine and the Hook Norton Brewery Dray through our local villages. The baton was on a year-long journey through WI organisations across the UK, which culminated with a celebration at the Royal Albert Hall

The images show the Baton on a cushion made by an Oxfordshire member, the horse drawn Baton on it way to The Gate Hangs High and being transported on an Old Fire Engine outside Spelsbury Village Hall.